The Time We Hiked Back In The Dark 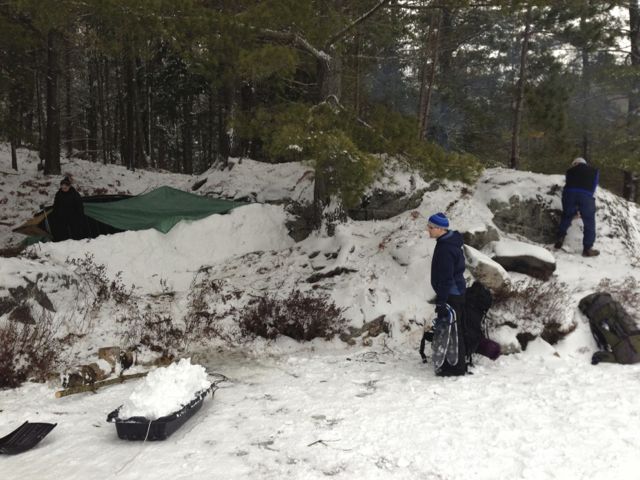 As a leader, I love to share my experiences with my team. Most of the time, this is incredibly positive. In this case, however, it didn’t work out quite so well.

In January of 2013, I offered my team at BoldRadius (then Tindr) the opportunity to experience winter camping. This is something that a lot of people never do – it takes careful planning, experience and the right equipment. Since Nick and I have done a fair bit of it – taking at least a trip a year for over 15 years, I thought we would be in a great position to show some of the team how it was done. And I would have been right except for one very significant oversight.

When winter camping, you gain a number of shelter options that aren’t available in the summer. Quinzees, snow covered lean-tos, and any number of improvised and cozy structures. In the past, Nick and I have had some success with a kind of lean-to. What we would do is to build up a couple of snow walls on either side of the shelter. Then we would find a long spar and run it across the mouth. Finally we would rig a tarp to the spar and use it to cover over the top, running it to the back of the shelter, and place another tarp under the sleeping bags. 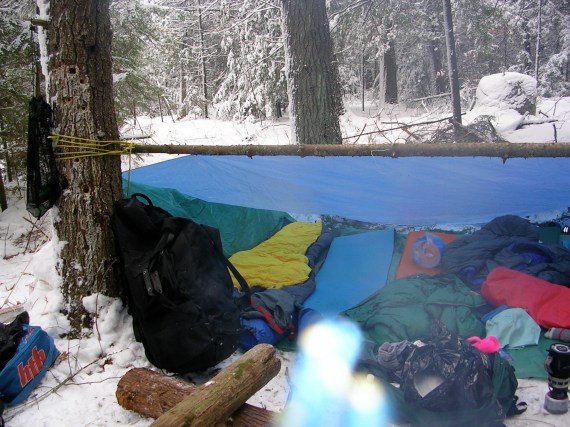 The shelter is warm with the snow walls providing insulation, dry because of the tarps and quick and easy to build. Unfortunately it does require the weather to cooperate – with enough snow on the ground and cold enough temperatures.

In the weeks before the trip, the weather was perfect for this kind of shelter and so I made the decision to use it and parked that decision deeply in my mind. I borrowed the tarps from my father, who insisted that they were huge and plenty large enough to do what I needed to do, and packed them away ready for the trip.

We watched the weather carefully in the few days leading up to the trip – it’s always a good idea to know what you’re getting into in a winter camp – and were pleasantly surprised to see that the temperature was going up. That gave us a lot of confidence – there’s nothing quite like a nice warm winter camping trip. I never thought to re-evaluate our choice of shelter.

To choose a location for the trip, Nick and I scoured maps and called the local Natural Resources officers. We were looking for a small lake that was difficult to access – one that was stocked with trout but that it was unlikely anyone had already fished out. These lakes are in extremely short supply in Eastern Ontario but we eventually settled on one that we thought was perfect. The lake was called Salt Lake. A tiny, stocked lake about an hour and a half drive south west of Renfrew Ontario, an then a two hour walk in with no marked trails. Armed with topographical maps provided by the Ministry of Natural Resources, we headed out. 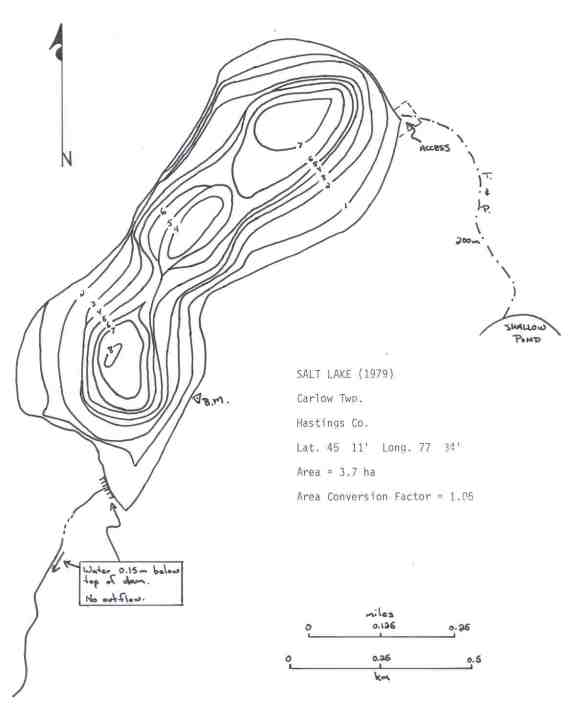 The trip started out with a whiteout and a slow drive behind snow plows to the put in point west of Ottawa. After a long and arduous hike cross country, including some steep climbs and bushwacking when the trail was lost, we arrived at the lake and put down fishing lines. Lines down, we concentrated on building the shelter.

The first problem was that the tarps that we brought to build the shelter with were too small for comfort – it was going to be a “friendly” night. In addition, the warm temperatures had melted the snow and made building the walls a real pain. As the day went on, we sawed down standing deadwood for the shelter and the fire. In a small stroke of luck, Steve found an old Sportspal canoe on the other side of the lake and dragged it back to extend our roof. Our makeshift shelter complete, we had nothing to do but to wait for the fish to bite. 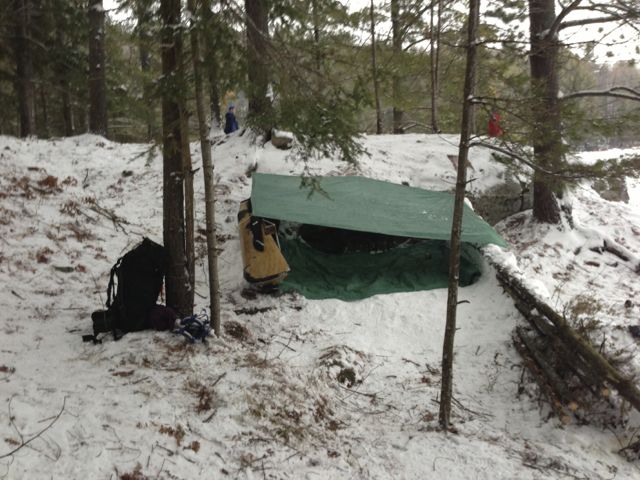 The not so great shelter…

Nick interjects: “I’d like to point out that Mike and I had a trip-planning call where explicit tarp dimensions were discussed. Given that we needed a shelter for five, we estimated that we needed a 8*12′ or 10*12′ tarp for the base, and a 12*16′ tarp for the roof; one that was large enough to cover an 8*12 space, with some overhang to bury in the snow and provide a front flap. From memory and the picture provided I believe that the tarps that Mike packed for the trip were both 8*10′. They were old enough to leak like sieves and would not have been sufficient even if they were sufficiently large.

Also, the pictures shows the lean-to v1.0. It had some major design flaws, including gaps for rain to come in on three sides. and a central slope that would have led to ongoing pooling. We re-built the shelter, flipping the canoe over for additional roofing and relegating Mike to the spot under the canoe, closest to the edge of the shelter.”

As the sun started to go down – still with no fish to show for our efforts – a light but persistent cold rain started to fall. Our “great warm weather” had turned into a liability. Had it been a couple of degrees colder, we would have had some light snow that would have just brushed off both ourselves and the shelter. The rain chilled us all to the bone, despite our waterproof gear. At around midnight, after some dinner including Nick’s excellent carne asada, the first member of our group, Rachel, decided to head to bed.

Shortly after entering the shelter, she called out that everything in the shelter appeared to be soaked and that there was a “pool” in her sleeping bag. When winter camping, water is the enemy. It sucks warmth from you and leaves you in a really risky situation. When we winter camp, we go so far as to completely change our clothes before bed to ensure that there’s not even a drop of sweat on our bodies before falling asleep. To do less is to invite hypothermia.

Nick investigated and made the difficult decision that there was no way that it would be safe for us to stay the night in these conditions. We had to head back – exhausted, frozen and certainly not happy. Calamity – and the fault was entirely mine. If I had simply chosen to bring the tents, we would have had no problem at all.

Nick: “Ironically, the only dry part of the shelter was Mike’s ‘second-class’ quarters underneath the canoe.”

We packed up all of the gear and, despite the exhaustion across the group, we were quickly on our way back to the cars. Fortunately we managed to find a trail that took us around the mountains on the way back rather than over them and kept us from having to bushwack our way out. Despite that, there were many times along the way that we had to stop and rest and coax each other to continue walking. The final 200m or so were the worst – I personally felt like there was no way that I was going to make it another step.

We finally arrived back at the cars at 2am. Unfortunately our adventure did not end there. After the long day of heavy physical activity and the forced march out, no one was in any shape to drive. But we had no option and had to make our way back – getting out to the cars only to freeze in them wouldn’t help us at all.

We split up into our vehicles – I went with Steve and Patrick, Nick and Rachel hopped into Nick’s pickup.

Steve took the first shift driving – valiantly making the attempt to slowly and carefully take us back to civilization. I remember nodding off a little and when I looked up, we were heading towards the edge of the road. I yelled, waking Steve up and he jerked us back onto the highway. It was a very close call.

Patrick volunteered to take the wheel. He was a trooper and drove us all the way in to Renfrew. We arrived at the Renfrew Inn and checked in, immediately falling asleep as soon as we got into the room and thanking our luck (and Patrick) that we had actually arrived back safely.

Nick’s drive back was slightly different.

Nick: “Rachel and I had a more trying trip back. Rachel is from Virginia, and is not an experienced winter driver. I can’t blame her for not being up for driving a pickup on unplowed roads, in a snowstorm, exhausted, at 3 am. I was too tired to drive as well, but the truck was too cold to sleep in. The solution was to drive for 20 minutes to warm up the truck, coasting along at about 50 kph and staying in the center of the road to avoid the shoulders if I started to nod off. We would then park on the side of the road and sleep for 20 minutes until the truck got cold. This took us to Renfrew by 5 am (normally a 1-hour drive), where we were pinned down in the parking lot of a McDonald’s during a winter lightning storm in which a literal sheet of rain came down at once on our windshield. Once it calmed, we bought breakfast and Rachel took over at Arnprior to get us home by 7 am.

All in all, it was an adventure which made us all appreciate summer camping so much more. And made us look forward to next time when we can (hopefully) be vindicated with a more successful trip, and maybe some trout!